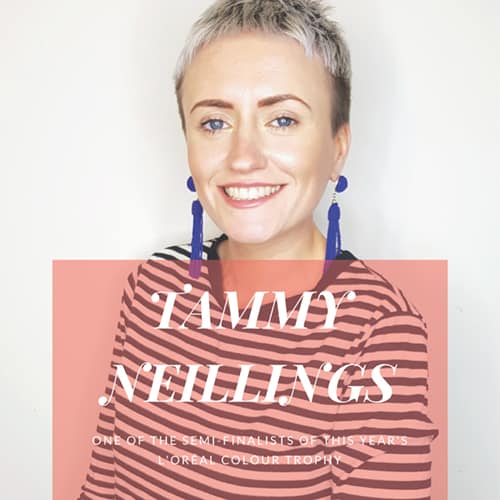 Tammy Neillings is semi finalist at the L’Oréal Colour Trophy and has been hairdressing for 8 years. Salon Manager at our Ocean Terminal salon she is one of our six Colour Specialists. She always likes to have something new and creative to focus on and after competing in the L’Oréal Colour Trophy last year and getting a taste for the competition Tammy just knew she had to compete again this year. This time round she has decided to set herself a challenge and has entered the Men’s Image Award.

After extensive research into current fashion trends Tammy decided that she wanted to create an image rather than a look. She wanted the hair to describe a personality and a lifestyle and has chosen  her male model to complement this. Think “young American”.

After entering earlier this year and reaching the semi-finals Tammy’s team at Ocean Terminal has been well and truly inspired. The younger team in particular have been involved in mixing colour formulas. They are looking forward to see the final look at the semi-finals. Especially because they can say that they were part of the process. The team knows that one day, with the right support, they too can compete.

Tammy is currently spending her nights handpicking potential outfits that her model will wear at the semi-finals. She has confessed that the Awards are all she can think about at the moment. “I’ve been dreaming about the clothes, it’s so exciting to be using a male model because the thinking and styling is totally different. Looking at it from a guy’s point of view we’re selling a totally different image which is an exciting change for me’.

After the Awards are all said and done Tammy is looking forward to a holiday to celebrate all her hard work before going back to the drawing board and deciding what will be her next focus!

In a bid to reach the Grand Finals of the 2018 L’Oréal Colour Trophy in London in June, Tammy is competing in the semi-finals of this prestigious event at the SEC in Glasgow on April 18th alongside 2 other Charlie Miller Colourists, Rosslyn Orr and Leigh Forrest.

We wish them all the very best of luck!